Who would think that over 60% of Western Australia is considered desert.  However, Western Australia has one of the most spectacular coastal regions with white sandy beaches, wild marine life, and transparent turquoise water which is inviting to any visitor to its shore. 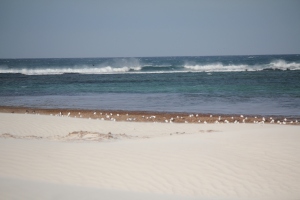 Perth, is of course, the main city with about 1.8 million people.  It is also one of the most isolated cities in the world but the trade off the the amazing road trips one can have within a two hour drive.

One can take a trip almost any part of the year, however to enjoy the contrast of colors, the best time to travel is between November and March.  My journey begins with a trip along the Indian Ocean Road up to Cervantes which I took during January.

While traveling north, we came along a road block where we were informed about a fire that was raging over the grey/wedge area.  It had crossed over the Inidan Ocean Drive which meant we either had to double back and take Brand Highway or change our itinerary a little.  We chose the latter as it was already 6 in the evening and the detour would add another 2 hour to our trip.

Lancelin is a great little fisherman/vacation spot.  It’s shore line is lined with seaweed which offer fauna a feast of bugs, bacteria and other juicy meal options.

Because it is fairly windy in this part of the world, Lancelin is a popular destination for kite-surfers and wind surfers. However, with two islands just off the bay, this would also be a great spot kayaking.

We decided to set up tent at the Lancelin Caravan Park, where we managed to grab the last tent spot just off the shore.  Being a non-power site we ended the day with sandwiches and coffee – a perfect camping meal!

A Road is the Beginning to an Adventure