I used to sit on the beach, look out over the water and watch kayaks glides effortless across the water.  And, I thought “Wow that must be an amazing experience”.

For years I have struggled to get into the water.  I could handle just walking through the water, but swimming was stopped by a massive fear of sharks.  Of course I wrote about how I handled this illusion, however you will still not find me swimming in the deeper side of the ocean —— yet! 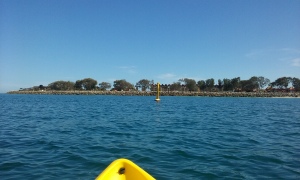 A few years ago I gave both SUP and kayak a trial.  Both of them were easy to do but in the end I felt I could travel further in a kayak than I could with SUP.  (maybe I feel safer – not sure)

This year, I was given a Kayak for my birthday.  Of course, it helped with selling all my cycling gear which I felt I probably will not be using for a while.

My first kayak experience was a short one.  If I had a heart rate monitor it would have been close to 200.

I took the Kayak to Whitfords Beach where I went to the first marker and back.  It was no more than about 50 meters.  However, I had to travel further and deeper than I have in the past.  My first trial did not count as I kayak along a very shallow coast line.  This voyage took me from turquoise blue to very dark blue, with no idea what would be underneath.  I returned – safe and no sharks to be seen!  (Fear of Sharks hiding in the water and waiting for the opportunity is now fading into a myth)

The second time I went out, I paddled from  Sorrento Beach.  The water was again perfect – not a ripple to be seen.  I stayed close to the shore line but far enough to feel ‘independent’.  I could see sand and some seaweed underneath me and the moment was amazing.  (Fear of Sharks hiding in the water and waiting for the opportunity to eat me – fading into a myth)

After this, I was hooked.  (no pun intended)  I have spent most weekend mornings and so

So – this weekend I suggest you hire a kayak if you have never experienced this, and kayak along the ocean or Swan River.  Make sure you have a life vest.  People think I am crazy but I have thought about every curve ball in this situation so if I am swept out deeper I have a BRIGHT pink vest which they can see me!  I also have a line attached to the oar in case the winds picks up….. and it rips the oar out of my hands.  And I have a little ‘hub’ where I can store things like a spare shirt, a phone and a few other knickknacks in case of emergency.  (The phone proved handy to take photos)

You can hire a kayak from a number of places, the the one I know is along Riverside Drive right on the  Swan Valley Edge.  They are called About Bike Hire.   However – have a google to find a place!  And if you see me out there with a yellow kayak and a pink vest – then you may as well introduce yourself.  There just might be a chance I will give you a go (of course I may have to look after you keys or something – LOL)

A Road is the Beginning to an Adventure